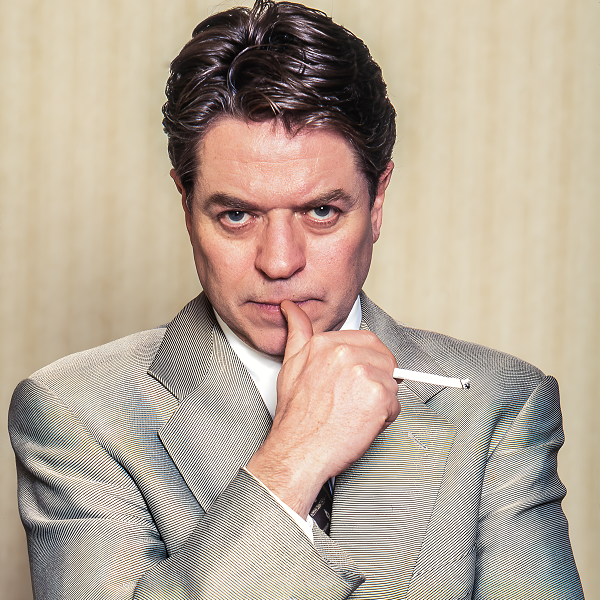 After 35 years making hit records Robert Palmer has mellowed but lost none of his trademark cool. He tells Jamie Dickson why he is delighted with "his new future"

"Were you around in Bangkok when they wanted to put me in that spaceship coming down through the ceiling? They had another thing coming."

In a darkened suite in the Landmark Hotel, Robert Palmer is giving interviews. The singer whose hit Addicted To Love became so highly played in the US that it 'became the national anthem for two weeks' is back in London, 16 years on, to promote for his new album, Drive.

He is reminiscing with his manager, Mick Cater, about the things that happened after Addicted To Love became a worldwide hit in 1986. Indeed, the image that most people have of Palmer is from the video of that song, directed by Terence Donovan. In it, Palmer appears as a slick crooner flanked by ranks of alabaster-faced models.

Today, he presents a more mellow persona. At 53, he looks relaxed and in good health. He is direct, affable and his speaking voice is very like his singing one: a bassy and expressive mid-Atlantic drawl that betrays little of his Yorkshire roots.

This is perhaps unsurprising as Palmer's family left for Malta when he was 18 months old, after his father was posted there in the Navy. Given his uprooted early years, I asked him about his first connection with music. He described listening to American Forces' Radio as a child and being unaware of what he was listening to:

"The music I heard growing up, since there was no TV or cinema or record covers, I didn't know if it was black, white, hip, square, male, female…whatever. I'd hear melodies and things and got intrigued on that level.

"My listening changed when I heard music from Stax, Atlantic, Motown because by that age I thought anything that my parents listened to must be square. So I had to find my own rock 'n' roll, as it were, and I found it in black soul music."

He began his career with bands back in England, moving to London in 1969 to front the Alan Bown Set and later, Vinegar Joe. But it was during the making of his first solo album, six years later, that he travelled straight to heartland of his adopted music, to record with legendary soul-funk band, the Meters, in New Orleans.

Did it feel intimidating to record with musicians whom he'd worshipped as a teenager?

"It would have been, if I'd have stopped to think about it. They were my favourite band and I was writing in their style. I'd toured America already a couple of times and I'd been on the road for ten years but the even so the concept of 'Uh-oh, big boys, deep end', you know…

"Whereas my whole psychological thing was just 'get there, do the do'. And within, I don't know, 15 minutes it was flying…It was like long-lost brothers."

The result was Sneakin' Sally Through the Alley, an album that featured down-home Louisiana funk given wings by Palmer's scorching vocals and the shimmering guitar lines of Lowell George from southern boogie outfit Little Feat, with whom he co-wrote some tracks.

This raises an intriguing point about Palmer; the Meters and Lowell George are names to conjure with in the world of record buffs, but you don't hear Palmer's name raised in the same breath very often. Why?

Perhaps it's because many of the later hits that made him an international star paired his voice with icily efficient synthesiser lines, creating a tightly-controlled, glassy sound that seemed to owe little to the freewheeling blues he'd espoused before. Why had he chosen to break away from that very natural, live sound?

Palmer's response is surprisingly pragmatic. In the years after New Orleans he'd become a full-time bandleader and he wanted to take control of arrangements in a way that meant more control and less rehearsal:

"As a means of doing that I started working on prototype synthesisers, just like on Johnny And Mary, Looking For Clues - really rudimentary…It was a toy, the thing that I did those on."

Rudimentary or not, it was the basis of a sound which caught the mood of the eighties perfectly. The desire and cold ambition of the times were reflected in Palmer's slick blend of soul with chrome-hard digital grooves. I asked if he ever felt he'd stepped too far away from his musical roots by doing so, mentioning a story I'd read about Mark Knopfler, of Dire Straits.

According to the article, he'd had a crisis of faith in his music after hearing Peggy Sue by Buddy Holly on a jukebox right after one of his own stadium-rock hits. He'd felt humbled by its simplicity and innocence compared to his own work.

Had Palmer ever had a similar moment of doubt? He looks almost shocked for a moment, then says quietly:

"No…oh, no. Do you know that if you look up sophisticated in the dictionary, it means corrupted from its original form? It doesn't mean that it's advanced."

This seems a strange admission from a man whose well-tailored image seems calculated to project sophistication. But he is talking about writing music and speaks with feeling on the subject:

"I'm introverted and I pay attention to my muse…Record companies used to go mad and say 'We don't know the deal with you. You have no continuity at all. You give us Addicted To Love and you're a Rock 'n' Roll star, then you give us She Makes My Day and what's that?' But that was a hit too. It either gets across or it doesn't."

He illustrates the point by enthusiastically recalling a group he'd heard recently:

"There was a band on Jools Holland the other night called the Libertines. Did you see that? They were these super-cute teenagers with heavy, heavy attitude and I thought 'If they can live through that they're gonna go far', because they were like a Japanese toy miniature…"

He tails off, lost for a suitable noun, before adding:

"They couldn't play for toffee but you know; so what? It's a matter of communication. I love Slipknot. But then I like Joao Gilberto...It's the spirit that comes through in music."

That's what's interesting about Palmer: despite having spent a long career in music it's what he wants to talk about first; he talks about it the way a sports fan talks about the game last night - he doesn't seem jaded by it at all.

He's very assured but not chippy about his status, and while he doesn't give much away about the personal dimension of his music, he's an engaging conversationalist. The only time he seemed slightly impatient was when I asked him what he wanted for the future. He cut across me to answer the question before it was finished:

"I've just made my new future, this new album I'm working on - I'm really delighted with it. As you learn the craft, which for me means arranging, writing, organisation, everything, the distance between the inspiration and what you hear back gets shorter and shorter…It's like yeah I've got it - next."

And, appropriately, at that moment it's time to wrap up the interview. The smooth soul man has another guest to entertain.

The compilation Robert Palmer At His Very Best is out now on Universal Music TV. His new album Drive will be released next spring.