David: First off, my sincere condolences on the death of singer Robert Palmer. You drummed many a year, on many a tour, on almost every continent with Robert. He was a big favorite of mine, and I know a lot about Robert as a performer. Tell me about Robert the person.
Dony: Besides my parents, Robert Palmer was, and is, the singular most important person in my life.... So far. Our partnership wasn't just about music, even though it became my ticket to the world. His role as teacher to my student opened doors to literature, gastronomic delights, wine and spirits, celluloid, clothing, art, photography, different cultures, artisans of all polka dot and stripe. All in all, a guide to living well and righteously. A creature of this planet. You could say he put some spit and shine on this rube. Every mark I make in the creative domain of this life, which is just now rounding into a new chapter, there is a piece of him in it. In everything I do, Robert's always there on the sidelines, cheering me on to dig deep and be the very best I can be. My burden, his gift.

David: Name the single most important gig you played with Robert Palmer. Where, when and why?
Dony: I can't say that one was any more important than any other, but there are some that are standouts, for whatever reason. There was a show we did in St. Louis at the Fox Theater that was magical. Downstairs, we'd seen autograph after autograph on the walls from many a famous performer all giving big props to the theater's acoustics. As we prepared for the show we wondered why so many compliments on the acoustics, figuring everyone was just brown nosing. In the middle of  Woke Up Laughing, a most transcendental song, done in the Imburu style of several different time signatures at once, Robert strolled back to the drums (when we both had a break in the arrangement!) and we had a quick conversation, both remarking at what a magical room this was, and now we understood the kudos written on the walls beneath this stage. The song and the theater were floating as we played, like being in a studio environment, the most magical time I can ever remember on stage. Otherworldly. As it turned out, Keith Richards picked that stage to present his backing of Chuck Berry for the film, Hail, Hail, Rock and Roll! I know why now. We also had a great show at Town and Country in London circa 1991. An incendiary show that the BBC captured for historical sake. Nut crunching, that set, with a great meal at my favorite Indian restaurant, Khan's, afterwards. All in all a swell evening. We also played a very small theater in Munich on that same tour, and as it turned out all of our buds in Rod Stewart's band were in town with a night off. When your peers are in the audience you tend to pick up your game a notch or two. We did. We threw down and the boys in Stewart's band were sent reeling. Mission accomplished. Like babies with big dicks.

David: Is playing on "almost every continent" an accurate statement? Tell me about the one spot on this planet that you did not play with Robert but wish you had?
Dony: Fairly accurate, safe to say. But one place I always wanted to go, but we didn't at the time due to the unstable nature of the governments, was South America. Buenos Aires in particular. Have always been fascinated by that locale. Still. And if I do, I will disappear for a few days to the South Pole, get lost for a while.... about the only pristine place left on Earth.... gotta hear the silence... leave humanus walkus erectus far behind. 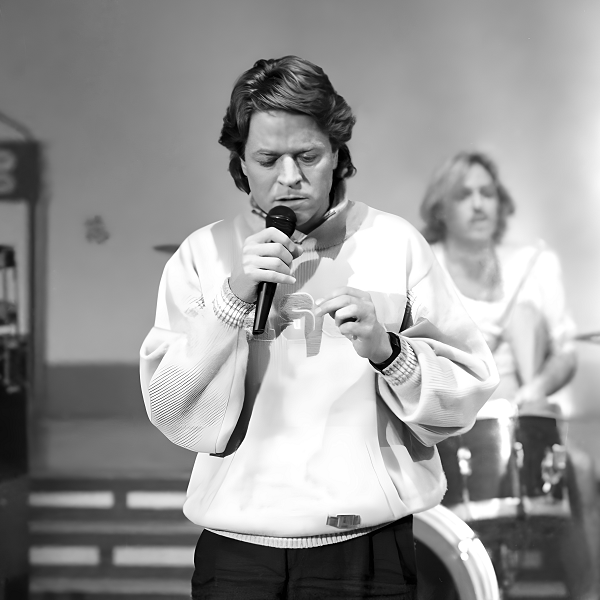 David: Robert Palmer seemed to be a magnet, attracting all types of musicians that wanted to play with him. Guitarists like Andy Taylor (Duran Duran), Steve Stevens (Billy Idol), Nuno Bettencourt (Extreme), and bands like The Meters, Little Feat, and UB40 come to mind. Has anybody ever turned down Robert's request to play for him?
Dony: AC-DC's Angus Young. And also Jeff Beck. The only two who ever declined our invite. Angus' reasoning was straight ahead. Their members never play with anyone else. Jeff on the other hand just doesn't give a shit about much else except tinkering with his hot rods. He does albums to finance his car habit. Beck is in a league of his own, too; like Miles Davis or Hendrix, they are off in their own world doing whatever in the hell strikes their muse, and is probably the only way they get off, by going out to that edge of that cliff and diving off where most are even afraid to climb the mountain in the first place. I'd had a chance to play with Jeff Beck and Randy Jackson at a NAMM Show one year, but two weeks before rehearsals Jeff dropped an engine block on his thumb, thereby canceling the showdown. Shame that, was looking forward to it. As it was, Robert liked to hire many different folks to complement his vision, and luckily for us we had the reputation for attracting and creating with the best and brightest the world over. Not a bad situation and we took full advantage. Still wonder what would've happened with both Angus and Jeff, but I guess we'll never know....

David: My kid brother, Joey, has always been a musical traveling partner of mine. We've driven to many a show, in many a town. As teenagers, new wave performer Gary Numan was a favorite of ours. You recorded with him and Robert, re-doing Gary's I Dream of Wires. Please tell me more about your interaction with Gary Numan?
Dony: Odd but likable bugger. Only ate burgers and only drank Cokes. Shifty eyes. He was on a flying tour of the world -he's a pilot- and he seemed uncomfortable with his new found fame, and that's probably why he was flying around the world in his plane, as he was, trying to elude the mania surrounding him. But he was very comfortable making music with us. Music was his comfort zone. He mentioned watching movies to get his lyrics. He plagiarized! We watched Barbarella and all during the movie he was furiously scribbling. But he played us some of his new stuff while he was there in Nassau and Robert was immediately attracted to I Dream of Wires. As it was, his bass player Paul Gardiner was down there visiting, and we cut a few tunes for Clues, which was an album way ahead of its time, utilizing sequences and drum machine patterns with some odd German machines Robert had picked up in Japan. That whole album was nothing but bass sequences for me to play to. I called it the "blips and beeps" record. So it was quite shocking hearing the final mixes as I had no idea what to expect. Really proud of that record.
Gary Numan actually played a very pivotal role in Robert's development. In the early '80s while on tour for the record Secrets - in Salem, Massachusetts of all places-, Robert came banging on my door at about midnight. I was in the company of a very sweet and sexy thing I'd met in Rochester, but hey, Robert was knocking, so I answered the door and there he stood practically shivering with excitement, like a little kid, telling me I had to listen to this new tune he'd found. Luckily for me, the gal was understanding. Well, for the next five hours, he played the Numan song, Cars, over and over and over and over again. Damn near drove she and I crazy, but I was tickled by his manic fascination, something that would repeat itself many times during our association. And after dissecting Cars, we plugged into a new way of analyzing the beat, utilizing drum machines into our music, for example. That's what prompted him to buy those German machines while in Tokyo. Numan was the inspiration for integrating synths and machines into our music. Something we utilized for every record since.

David: Robert Palmer wasn't just a great singer, he was a great songwriter. But he also covered songs by Bob Dylan (I'll Be Your Baby Tonight), Billie Holiday (Don't Explain), Marvin Gaye (Mercy Mercy Me/I Want You), Devo (Girl U Want), and Todd Rundgren (Can We Still Be Friends?). Which songs written by Robert could these performers have hypothetically covered and did justice to?
Dony: Bob Dylan: Disturbing Behavior, Billie Holiday: Aeroplane, Marvin Gaye: Dance With Me, Devo: Your Mother Should Have Told You and Todd Rundgren: She Makes My Day.

David: Last Robert Palmer question: Those four ladies in short black skirts from the Addicted To Love video. Do you have their phone numbers or e-mail addresses for a dirty, old man like myself?
Dony: Those women were way too skinny for my taste. I like them more curvy, like Brazilians and Mediterranean women, so I'm sorry, can't be of much help here as those women did diddly for me. Still don't.